The local newspaper “Rakunan times” introduced the article about Greentea in Paris the title of which is “The name of tea, enchanting Parisien is Thé Uji” today.

I always find Kyoto municipal government is working on expanding Uji-cha brand outside in Japan when I have conversations with the city employees. We, the private sectors are also working on it with them.

We’re having epic year 2017 as the year of Kyoto’s tea. I only found Japanese website of that topic named “Ocha-no-Kyoto”.

When I was in NYC for a trip, one of the tea shop keepers told me that Paris is known as “Gateway to success” city to expand brands like food creators, Clothing maker or many producers. As a matter of fact some Japanese tea shops are trying to expand their brands in the downtown Paris. I visited Toraya and Jugetudo in Paris and they were doing very well. 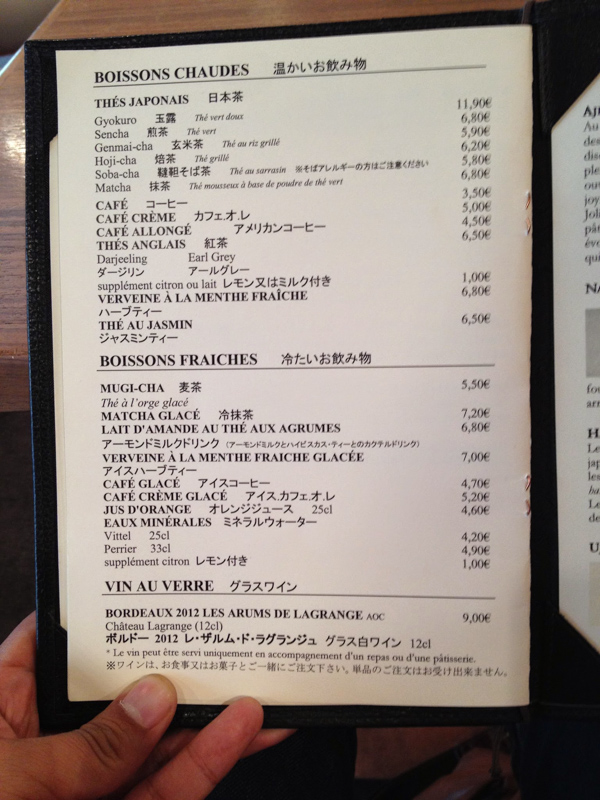 Unfortunately I only took a picture of menu..

I served green tea to many people who has never drunk it when I was traveling around the US and Europe. Some said they really liked the tea but the other felt it weird taste like seaweed or butter. I got an interesting advice from one of them who was . He said “Although the sense of taste actually depends on the background of each people, the top 1% of the people who have very good tongues know the difference.”

I can understand his opinion because there are some good practices of Japanese traditional products. “Dassai” which is premier brand of Sake is one of the good examples. Asahi shuzo which is the maker of Dassai only produces superior sake which is called “Daiginjo” class. You would feel the peculiar taste from cheep sake but not from Daiginjo class. They don’t have any piece of rough taste and are completely perfect taste. Many people, who has never tried Sake, began to prefer sake and now the brand is known as the best sake in Japan.

Greentea has similarity with sake. The superior rank of greentea tastes perfect but cheep one give the strong bitterness. Now matcha has been become the world’s favorite. I believe the loose leaf tea is the next.

I’ll do my best to expand Ujicha brand.